The ground dwelling insect Aleochara bilineata is recommended in the cases of solid formulations incorporated as such in the soil or formulations to be applied as spray on soil.
Adult beetles, between 1 and 7 days after hatching from Delia antiqua pupae, are exposed to the test substance applied on quartz sand (laboratory test) or on natural standard soil (extended laboratory test) by spraying or by incorporation in order to evaluate the effects on their reproductive capacity. Ten pairs of adult males and females are placed on treated quartz sand. During the following 3 weeks 500 Delia antiqua pupae/week/replicate, are added to the test unit and after 4 weeks from the treatment the adult beetles are removed. The fly pupae are placed in to the hatching units and the effects in terms of reproduction ability over a period from 6 to 8 weeks are assessed recording the number of the newly emerged adult beetles. 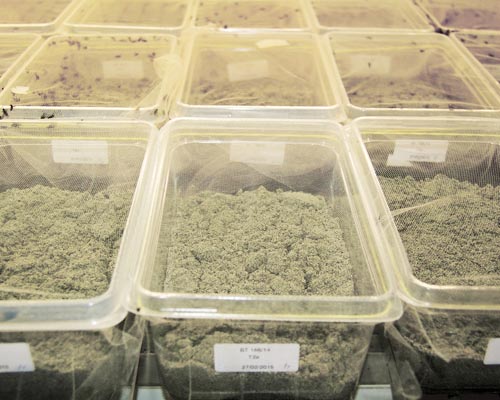 Fill in the form with the required information (*).
Our team will be happy to provide all the necessary support with regard to your request.